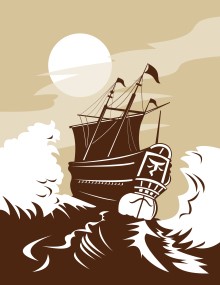 Most people know that when the seas are smooth almost anyone can be a sailor.  That said, it is when the waves start to crash around and on us that we find out if we have been in the hands of a real sailor all along.  Not just because he or she knows what to do in the storm, but that the ship is solid enough going into the storm to survive it.

The rough seas we deal with today can be found in things like the recent Ebola (Covid-19) scare.  It is critically important that a leader stand and be counted upon when a crisis erupts.  However, the mark of a good leader is the shape that his or her ship is in when the crisis hits.  The recent crisis points out a number of holes in the hulls of many hospital systems.  Whether the hull damage is as obvious as a lack of preparedness for handling/containing something like a dangerous contagion or as subtle as a work environment where distrust is but one rumor away, the truth of leadership is shown not solely in guiding an organization through the storm, but also ensuring that it is strong enough to weather the storm before it begins.

This point came to me in a recent conversation with a healthcare executive when we were talking about the growing public concern amid the Ebola cases here in Texas.  He told me that he was less worried about the public reaction (storming the emergency rooms) and more concerned about his staff’s reaction.  His fear was that national unions would use this crisis to launch a recruiting offensive (a storm).  He indicated that there were already some rumblings in other places, but they hadn’t taken hold quite yet.

As it turned out, that storm fortunately never came and the crisis ended almost as fast as it began.  That said, the lessons to be learned remain.  In our ever-changing and growing business environment, whether in healthcare, manufacturing or finance, real leadership requires that leaders know the strength of the hull of their ships at all times and continuously work to strengthen it when the seas are smooth.  That then allows the leader to guide their ship through the storm, and there will be storms, by focusing on the storm and not the seaworthiness of the organization.

The question to you is when the storm hits, will your leadership shine or will the truth show?