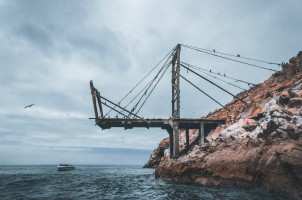 The Paradox of Leadership Success

Success is a horrible teacher!

Over the past month or two I’ve found myself repeating that line time and again when talking to leaders about their leadership.  Why?  Because it’s true, success is not always a good thing for some people and/or companies!  I’ve talked about it for years, but until recently I had never quantified it that way.  I’ve worked for, and with companies and individual leaders that were too comfortable with their success.

Case in point, I had coffee the other day with an old friend/former client.  We were talking about all of the changes that were going on in his company.  He started off talking about how strong their financials were and how their sales continued to grow (beyond forecast levels), but were starting to slow down.  He mentioned that competitors were rapidly catching up with their new technology, and that he was concerned, but couldn’t get his peers, or his CEO to listen.  Any time he brought it up, he would be shutdown and accused of being negative along with other “sky is falling” references.  It was obvious that the CEO and several of your peers were quite comfortable with how the company was doing and weren’t concerned in the least.

This is a classic case of a company (leadership) being comfortable in their success and either failing to see the potential discomfort coming, or fearing the discomfort that changing now will create.  The disruption and pain caused by change is a great incentive to sit back on your haunches and simply do what you’ve always done.  The problem, as we all know, is that the world doesn’t stop changing, nor do the markets in which our businesses operate and it is that reality that companies often find themselves dealing with too late.

The challenge with success is that it sends a false message that “we are “okay” for now,” even though we know that change has to occur at some point to avoid calamity.  The problem is that it is always easier to change tomorrow than it is today, or at least that is what it feels like to many.  However, as we all know, the opposite is true.  The longer we wait, corporately or nationally, to make the changes needed today – the tougher, more costly the changes will be.  The comfort success offers will run out at some point and the discomfort (the cost for getting comfortable), will be significantly more than it would be today.

My hope is that more businesses, as well as our national leaders recognize that fact and be leaders that take the actions needed based on future calamity, rather than current comforts.  One thing is for sure, if they don’t, consultants will always have a job and its a good thing since my taxes likely won’t be getting lower!

The paradox of success is one that we all need to deal with.  It really is a pretty simple premise, just not an easy one to start.  Here’s to success and its teachings!

Leadership is a pretty simple concept, just not always an easy one to demonstrate!